The Future Is As Bright As The Promises Of God

Most people have heard and many have been taught to apply the golden rule since childhood.  “And just as you want people to treat you, treat them in the same way,” Luke 6:31 (NASB).

While Jesus never referred to Luke 6:31 or Matthew 7:12 as the “golden rule” His statement summarizes the essence of the ethical behavior expected of His followers.  Believers are encouraged to live in obedience to God’s law by treating others the way we ourselves would want to be treated.

The Greek philosopher Epictetus said, “What you avoid suffering yourself, do not afflict on others.”  The Greek king Nicoles wrote, “Do not do to others the things which make you angry when you experience them at the hands of other people.”  But what Jesus said is, “Take the initiative in doing good.”  This is the key to the discipleship that Jesus wants — the kind of love God shows to people every day.

The Louisiana ACLU has asked court officials to remove a portrait of Jesus (which has been in place for several years) from the lobby of Slidell City Court within a week or face a possible lawsuit.  The organization sent a letter June 20 to court officials stating the display violates the First Amendment by advancing religion.

City Court Judge Jim Lamz said in a statement, “I was shocked and disappointed to receive the letter.  To my knowledge, no one has made a complaint.  I’m disappointed the ACLU released their letter to the press either before or simultaneously to us, which indicates they’re not interested so much in resolution, but in confrontation and publicity.”

Katie Schwartzmann, the ACLU attorney who wrote the letter, said the display conveys a religious message and instructs those who see it to obey Jesus’ laws.

Joe Cook, Louisiana ACLU executive director said, “If you can’t accommodate, you must separate.  That’s the beauty of the First Amendment.”

The First Amendment implies no such thing.  As a matter of fact, one judge said during the court case of Bear vs. Colmorgan (1958), “If this court doesn’t stop talking about the Separation of Church and State, everyone’s going to think that’s what the Constitution says.”

The First Amendment reads, “Congress shall make no law respecting an establishing of religion, or prohibit the free exercise thereof.”  I believe our Founding Fathers did not want a national religion (like the one they left in England) but also wanted it understood that government is not to oppose the freedom of religious expression.

What did our Founding Fathers and patriots say?

Patrick Henry:  “It cannot be emphasized too strongly, or too often, that this great nation was founded not by religionist, but Christians, not on religion, but on the gospel of Jesus Christ.

James Madison:  “We have staked the whole future of American civilization not on the power of government, far from it.  We have staked the future of our political institutions upon the capacity of each and all of us to govern ourselves according to the Ten Commandments.”

Benjamin Franklin:  “Whoever will introduce into public affairs the principles of Christianity will change the face of the world.”

I could quote many others and cite hundreds of Supreme Court decisions (prior to 1963) stating that Christian principles are never to be separated from the government.

A couple of years ago I had to go to Leon, Oklahoma for a speaking and singing engagement.  As I reached the top of a hill near the Red River border I was surprised to see a herd of llamas in the middle of the highway at the bottom of the hill.  Upon seeing an unfamiliar Toyota, they immediately scattered and headed for the borrow-ditch.

Upon returning home that evening I called my mother to let her know I was back in town.  During our telephone conversation I remembered seeing the llamas, and said, “There was a bunch of llamas in the road between here and Leon.  She asked, “Were they riding motorcycles?”  After a moment of silence I replied, “No, they were just standing there looking around.”

Confused by mom’s question, and amused by the mental image of a long-necked llama riding a motorcycle with his head thrown back and his sideburns blowing in the breeze, I said, “They did move out of the road when they saw me coming.” “Um,” she said, “I bet they were looking for an escapee.”

“What,” I thought to myself, “A herd of llamas on motorcycles looking for an escapee?”  That’s when I realized she understood me as saying “lawmen.”

I also realized that the misunderstanding was no fault of my mother’s.  Every time  I try to call one of the utility companies I am greeted by a computer that says, “State your name.”  After stating my name, the computer then says, “Please repeat.”  After two or three attempts with the same results, I put in my dentures and repeat my name once again only to hear, “Unable to understand. Please press ‘0’.” 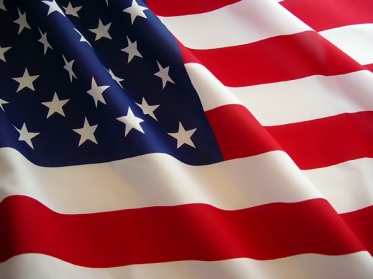 Monday, the C-Span question of the morning was, “Has God blessed America?”  I heard only two callers deny the fact that we are, not only blessed with the privilege of living in America, but also denied the fact that God has abundantly blessed our nation.

The first negative response was from a white man with a northern accent who, after saying “no,” proceeded to offer a ridiculous commentary on Iraq.  The second negative response came from a black retired school teacher who lives in Alabama.  She went so far as to refer to America as “Mystery Babylon” (must be Alabamaological, its certainly not Theological).  Her rationale seemed to be that America is more of a hell than a heaven because slavery was once the norm.

These people, whomever they might be, need to have their brain removed and cleansed with some of grandma’s lye soap and placed back in its cranial cavity after some much needed fine-tuning.

Has God blessed America? Yes! Anyone who does not appreciate the blessings we enjoy as Americans, the freedoms we share, the beauty and glory of America, should move to an African village and live in a mud hut while wondering where their next meal will come from. Or, move to Iran where a person is stoned to death simply for kissing someone in public. Or, go live in some other extremist country where women are flogged for showing their ankles, failing to wear long sleeves to cover their arms, or refusing to cover their face.

Has God blessed America? Yes! I firmly believe that for over 200 years God has richly blessed this great nation, and the irrationality and imbecility of others can never change my mind.

For this Friday’s devotional I think we’ll look at Luke chapter 10, where we find Jesus visiting the home of Mary and Martha.

“While they were on thier way Jesus came to a village where a woman named Martha made Him welcome in her home.  She had a sister, Mary, who seated herself at the Lord’s feet and stayed there listening to His words.  Now Martha was distracted by her many tasks, so she came to Him and said, ‘Lord, do you not care that my sister has left me to get on with the work by myself?  Tell her to come and lend a hand.’  But the Lord answered, ‘Martha, Martha, you are fretting and fussing about so many things; but one thing is necessary. The part that Mary has chosen is best; and it shall not be taken away from her.'” (NEB)

I guess there are a lot of us like Martha.  We are born with a “getter done” attitude; constantly checking our mental “to do” list.  And there is certainly nothing wrong with being a Martha — but we must also be a Mary.

Each of us have tasks to accomplish — everyday things that just can’t wait.  But as important as those things may be, what is most important is that we remember to take the time to stop and listen to God.

A Turkey In Carthage

As I was transferring some LP’s the other night I came across a song I had written in the ’60’s entitled “I’m Going Back To Lubbock”, recorded by Charlie Sloan for Cowtown Records.  The tag line was something like, “Lubbock where the trees are green, the prettiest women you’ve ever seen, and no one there ever treats you mean in Lubbock.”  What was I thinking?  There may be some pretty women and nice people in that part of Texas, but there ain’t no trees.

People in that part of the state think a tree is two feet tall, two feet in diameter, and tumbles across the road when the wind comes sweeping across the plain.

I have been invited to Turkey a few times but it’s much to close to Lubbock.  After spending a semester in west Texas, I came to appreciate Mac Davis’ title “Lubbock In My Rear View Mirror.”

On the other end of the spectrum, I have been blessed with the honor of performing at the Texas Music Hall Of Fame, an awe inspiring stupendous edifice located in the piny woods of the east Texas city of Carthage where there are lots of trees.  Older and wiser and after meeting several pretty women and many nice people in this east Texas community, I think my song title should have been “I’m Going Back To Carthage.”

Saturday I decided to go to the local DQ for lunch.  When I told the young lady behind the counter that I would like to order a hamburger, she immediately responded, “Cheese on that?”

An uncontrollable surge of violent rage suddenly engulfed my entire body.  My mind went blank, I was in a daze, confused.  “Did I order a cheeseburger?” I thought to myself, “No, I’m sure I ordered a hamburger, and a hamburger doesn’t have cheese.”

As I sat at my booth eating a cheeseburger with no cheese, shamed by my behavior, I tried to think of some verses of Scripture dealing with cheese. The only one that came to mind was Job 10:10, “Didst Thou pour me out like milk, and curdle me like cheese?”  I knew that was of no spiritual help in my current situation but I did recall several verses that address anger.

As I silently cited a few verses and regained my composure, I thought, “How weak can a man be?  I’m really in trouble if I let a piece of cheese get to me.”  Then I remembered a bumper sticker I saw several years ago, “If you really love Jesus, keep your cool.  Anyone can honk.”

When ordering at the local DQ in the future, I will simply and graciously say, “A cheeseburger with no cheese, please.”